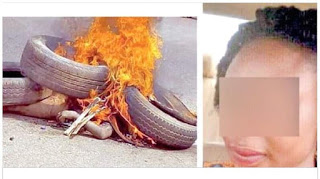 A 41-year old woman whose name was Mary Kulele from Akwanga Local Government Area in Nasarawa state was caught at a hospital in Akwanga where she quietly went into the hospital pretending to be a nice woman by rendering selfless services to pregnant women.

Although the baby was recovered in good condition, the angry youths in the area took laws into their hands and lynched her.

Despite her lengthy narration of her sympathetic life and marital experience, her plea for mercy and forgiveness fell on deaf ears as the youths smoked life out of her. She wailed and pleaded that her life be spared. She promised never to do it again but nobody came to her aid.