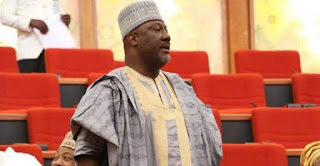 Senator representing Kogi West, Dino Melaye, has picked holes in the 2019 budget of the federal government saying the dollar may soon trade at N500 if the right measures are not put in place.
It was reported that Melaye stated this while contributing to a debate on the N8.83 trillion budget on the floor of the house.
The lawmaker said the appropriation is unrealistic by many indications.
He said the budget is one Nigerians should be ‘sorry about’ as it does not bear any plan for the poor.
“This budget is what Nigerians and the parliament need to be sorry about,” he said.
“We have to look at the state of the economy and provisions of the budget there in. Federal Government spent $41 billion to cushion and stabilise the naira. How long can we continue to live in sin and grace continue to abound?
“We do not have any reserve to continue devaluation of naira. Oil price has dropped to 50 from 60 (dollars per barrel). This is very significant and makes the projection of the 2019 budget unrealistic.
“There is a drop in Internally Generated Revenue and the revenue of customs. Federal government has no money to subsidise fuel. In the midst of this calamitous situation, how do we now finance the 2019 budget? Are we going to fund the budget based on daily contribution? Are we going borrow again? These are questions begging for answer. I want to announce to Nigerians, despite the hypocrisy of the federal government, despite the lies, I prophecy to you that the federal government will soon deregulate. Inflation is on the rise, unemployment in on the increase, yet we have a budget that has nothing for the poor masses of this country,” Melaye said.
Top of his criticism is a prediction that the Naira to Dollar rate will rise to N500 to one Dollar in the next two months.
“There is no longer foreign investments. I announce to you that with all these indices and yard sticks, by the end of May, except there is a miracle, dollar will rise to N500 to 1 dollar. Because we have depleted our foreign reserve. We are a borrowing nation.”
Reports has it that the Senate on Wednesday opened deliberations on the 2019 budget.
The budget is expected to be passed for second reading after another day of deliberation on Tuesday March 19.