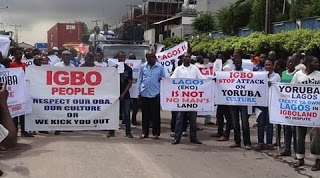 President Muhammadu Buhari has won his re-election bid, despite his major opponent, former Vice President Atiku Abubakar of the Peoples Democratic Party, sweeping the votes of the eastern corridor of Nigeria.

The fallout is that the battle unfortunately shifted to Lagos State, the ideological base of President Buhari’s All Progressives Congress, and led to physical and verbal skirmishes between the Yoruba indigenes of Lagos State, and their Igbo guests and compatriots.

Lagos State, with its cosmopolitan mix of core Yoruba, their compatriots from other parts of Nigeria, and foreign nationals, became the battleground of the vicarious war between the APC and the PDP.