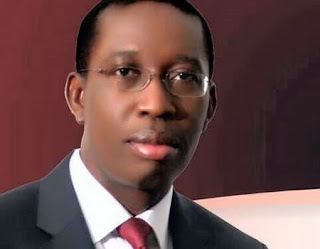 Dr Cyril Omorogbe of the Independent National Electoral Commission (INEC) has officially declared Senator Ifeanyi Okowa of the People’s Democratic Party (PDP) as the winner of the Saturday, March 9 governorship poll in Delta State.
The Independent National Electoral Commission (INEC) on Monday declared Gov. Ifeanyi Okowa of the Peoples democratic Party (PDP) winner of the 2019 governorship election in Delta.
The State Returning Officer of INEC, Prof. Seth Accra-Jaja, Vice Chancellor, Federal University, Otuoke, Bayelsa, declared Okowa winner of the contest on Monday in Asaba.
Jaja said, “I hereby certify that I was the State Returning Officer for March Governorship election.
“The election was keenly contested by different candidates and Ifeanyi Arthur Okowa of the PDP polled a total number of 925,274 votes to defeat his first runner up, Chief Great Ogboru of the All Progressive Congress who polled a total of 215,938 votes.’’
He said that the total number of registered voters in the state was 2,831,205, adding that the total number of accredited voters was 1,188,784.
According to him, the total number of rejected votes is 24,147 and the total number of votes cast is 1,178,335, while the total number of valid votes is 1,154,188.
The News Agency of Nigeria (NAN) reports that Okowa won in 23 out of the 25 local government areas of the state.
Some of the local government areas where Okowa recorded his highest number of votes included Warri South West where he scored a total of 139,534 votes as against his opponent who recorded 10,906 votes.
Okowa also recorded 63,851 votes in Bomadi local government area, where Ogboru scored a total of 4,437 votes.
However, NAN reports that Ogboru polled 21,141 totes in his own local government area, Ethiope East, where Okowa recorded 11,489 votes.
Ogboru also won in Ughelli North where recorded 22,081 votes against Okowa who polled a total of 19,045 votes.
Consequently, representatives of different political parties signed the result sheet provided by INEC except APC agents who refused to sign for alleged discrepancies in the election results. (NAN)
Details coming.