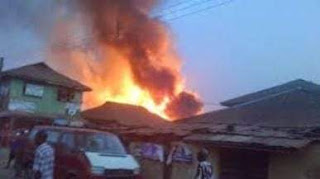 The Ngor Okpuala local government office of the Independent National Electoral Commission (INEC) in Imo state is currently on fire.
It was gathered that suspected hoodlums had invaded the place while electoral officials were collating results of the just concluded governorship and state assembly elections in the locality.
Sources told the media that the suspected hoodlums broke into the place around 2pm (today).
She said they overpowered by the local security guard present before setting the place on fire.
“Policemen quickly moved in and guarded the electoral materials while the officials where taken to the INEC head office in Imo, where they are currently collating the final results,” she added.
Francis Ezeonu, Imo resident electoral commissioner, told TheCable that the election was compromised in the area.
More to come…