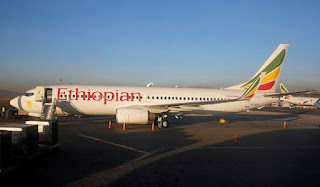 An Ethiopian Airlines plane has crashed with 149 passengers and 8 crew onboard, minutes after take-off.
It was reported that the plane heading to Nairobi left Ethiopia Sunday morning but according to reports came down within six minutes.
A spokesman for the airline confirmed the plane had crashed while heading from Ethiopia’s capital, Addis Ababa.
The airline’s statement said: “At this time search and rescue operations are in progress and we have no information about survivors or any possible casualties.”
The state-owned Ethiopian Airlines calls itself Africa’s largest carrier and has ambitions of becoming the gateway to the continent.
The plane, a 737 MAX 8, is believed to be a new addition to the EA fleet having been delivered just months ago.
The Ethiopian Prime Minister’s official Twitter account on Sunday sent condolences to families of those onboard without giving details over whether there are any survivors.
“The office of the PM, on behalf of government and people of Ethiopia, would like to express it’s deepest condolences to the families that have lost their loved ones on Ethiopian Airlines Boeing 737 on regular scheduled flight to Nairobi, Kenya this morning,” the PM’s office said on Twitter.