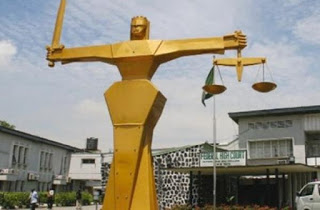 A 35-year old man, Mr, Paul Nosakhare, has told an Oredo Magistrate Court of how he caught his newly married wife, Stella Maris Alegbe, with his Pastor, Joseph Igwemoh, Head of the Global Influence Ministry.

Pastor Igwemoh was last year arraigned on two count charges bothering on abduction and act likely to cause breach of peace was accused of sleeping with Stella inside his church.

At the resumed hearing of the case, Paul, during cross examination told the court he served as an Assistant Pastor to the suspect before the sexual scandal broke out.

Paul said he met Stella through Pastor Igwemoh and they courted for four years before they got married on March 24, 2018.

He said marriage lasted only three months as his wife moved out in July after the Pastor rented an apartment for her.

He stated that Pastor Igwemoh warned them not to have sexual intercourse until proper marriage is done while they were courting.

Paul said his wife denied him sex on the first and second night of their wedding which was conducted by Igwemoh.

According to his statement on oath before the court: ”I reported my wife refusal for me to have sex with her to my pastor who invited us to his office and advised both of us to be using condom for the period of three months.

“I was puzzled but I did not say anything because he is my pastor.

“There was a day I returned Pastor’s car to him in the church. I met one Pastor Comfort who told me Pastor was inside the office.
After knocking severally, the Pastor refused to open the door but he switched off the light.

“After five minutes, I saw my wife coming out of Pastor’s office ruffled and sweating profusely. Pastor came out of the office and was wearing boxers and singlet.

“On June 17th, I went to the Pastor’s office and met my wife. The pastor was lying down in the bed while my wife was sitting on the floor very close to the Pastor.

“I asked my wife to follow me home but she to say saying she has not finished with the pastor. She returned home at 7pm.”

Paul said all efforts for him to make the marriage work failed as his wife moved out on July 6th, 2018.