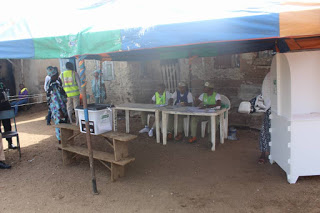 Polling units visited by the Media in Osogbo, Ede, Ilobu and other parts of the state observed indefferent attitude of residents in the areas to voting during the OSHA Election.

Speaking with newsmen, some of the INEC ad hoc staff said the massive turnout experienced in the presidential and national assembly elections cannot be compared to today’s election.

According Mr Azeem Adebowale, the candidate of the Action Democratic Party for Ede North said the problem could be caused by the earlier sporadic gunshots on Friday, in Ede.

Mr. Isaac Adeleye who spoke with our correspondent said the low turnout is as a result of the intimidation by the security opperatives in these areas.

“Some electorate who live far away from their polling units are not allowed to come out with their vehicles to vote, and so have to make U-turn”.

Other towns visited by our correspondents are currently experiencing similar situation.