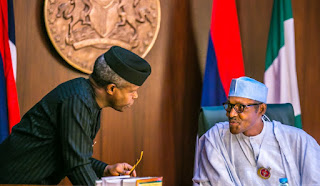 A senior Pastor of the Awaiting The Second Coming Of Jesus Christ Gospel Church, Pastor Adewale Giwa, has advised President Muhammadu Buhari and his deputy, Yemi Osinbao, to vacate their offices.
Warning of consequences, he said Buhari forced himself on Nigerians during the presidential election like Abimelech, the son of Jerubaal (Gideon) who forced himself on the people of Israel.
In a statement he personally signed and forwarded to the media on Thursday, Pastor Giwa described February 23 elections as “the worst Nigerians had ever seen.”
“Abimelech ruthlessly murdered people believed not supporting his ambition to become the king in Shechem. Apart from this, he kills 69 of his brothers, declaring himself king and demanding tribute from the surrounding cities.
“The only one brother who survives, Jotham warns Abimelech that this atrocity won’t go unpunished. It takes few years, but Jotham turns out to be right by his prediction.
“A wicked can be doing sort of things, but he or she shall not go unpunished. You don’t force yourself on the poeple because the repercussion is dangerous”, Giwa said.
The Pastor also expressed disappointment on the vice president Yemi Osinbajo, saying he expects him to know better.
According to Giwa, “Professor Yemi Osinbajo, being a Pastor should know better, and should be able to do the needful.
“What are the legacies they are leaving behind for our children who watched the show of shame and rascality displayed by political thugs during the elections?
“Are we moving forward or backward in Nigeria? If the previous government didn’t do well, must you do the same?
“Surely, God answers prayers, but He detests lying lips. By now, one expects Pastor Osinbajo to tell Nigerians he is resigning from this government.
“What will it profit a man if he gains the whole world and forfeits his soul? What are they doing for the families who lost loved ones during the exercise?
“All they are preparing for is another election, power, position and money.”