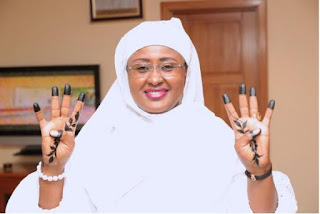 Wife of the President, Aisha Buhari has advised the All Progressives Congress (APC) to consider only card-carrying members for political appointments.

She made the call at a dinner to celebrate the victory of President Buhari in Daura, his home town on Thursday 7th March, 2019.

The event took place at the Daura Stadium and attracted women and youth supporters of the APC from across Katsina state.

Aisha noted that the constitution of the party specifies that appointments to offices in an APC led government should go to card-carrying members.

She thus advised that the party constitution should be respected.

She expressed appreciation over the support that the party enjoyed in the last Presidential election, especially from women and youth and assured them that government will do more to improve their lives.

“I wish to thank the women and youth of this country for the number of votes they gave President Buhari in the 2019 election and to assure that he will continue to do his best to make Nigeria a better country.”

One of the speakers at the event, Minister of Aviation, Senator Hadi Sirika praised the electorate for choosing President Buhari, whose integrity, he said, is time-tested.

He assured them that the second tenure will result in development in all spheres of endeavour.

He commended Aisha for her initiative in engaging women and youth during the presidential campaign, which resulted in the massive votes recorded.

The event was attended by wife of the Governor of Katsina state, Zakiyya Masari, wife of the Deputy Governor, Mannir Yakubu and wife of Minister of Interior, Hadiza Dambazau.

Various artistes performed at the occasion.