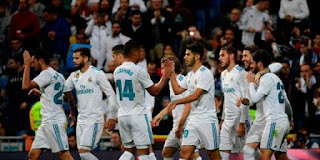 Ajax Amsterdam stunned Real Madrid to advance to the Champions League quarterfinals after a 4-1 second-leg win to complete a historic 5-3 aggregate comeback victory.
Dusan Tadic had a goal and two assists as Ajax sent the three-time defending UCL champions packing from the competition in Madrid’s worst home defeat in their European history.
The hosts, leading 2-1 from the first leg in Amsterdam and without suspended Sergio Ramos, were denied a dream start inside of five minutes when Raphael Varane smashed a headed shot from a Lucas Vazquez inswinger off the crossbar.
The loss was the fourth straight at home for Madrid — including two in a row to archrivals Barcelona — something that hadn’t happened since 2004, and capped one of the worst weeks in the club’s recent history.
It also ends an unprecedented era of dominance in the Champions League after winning three straight titles. Madrid had reached at least the semifinals in eight straight seasons and hadn’t failed to make it past the round of 16 since 2010.
Ajax were playing in the round of 16 for the first time since 2006.