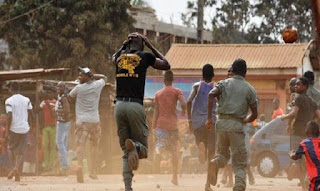 There is currently heavy tension in Zamfara State after gunmen stormed two communities, Shinkafi and Anka Local Government Areas of the state and killed many people.
It was reported that the ugly incident came less than 24 hours after Governor Abdul Aziz Yari swore to deal with bandits in the state.
The Governor had ordered security agencies to deal ruthlessly with bandits before the latest attack.
The bandits, who move in high number on motorcycles, were said to have attacked the community and Danjibga in the local government areas by residents.
Army spokesman of Operation Sharar Daji confirmed the two incidents.
He said the casualties and extent of damage in the attacks will be released later, stating the Commander- in- Charge of the operations has arrived the area to provide security and get on-the-spot assessment.