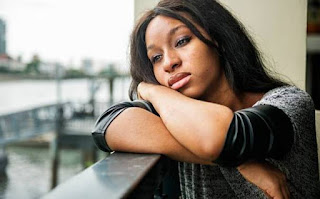 A Nigerian lady who is in despair, is hopeful that God will fight her battle after she was conned into spending time with a guy who promised her lots of goodies but after the deed was done, he jilted her with only an atom of what he’d initially promised.

The lady who wrote to relationship expert, Joro Olumofin, revealed that she met the guy on Instagram and before they decided to meet, the guy had promised her money for her hair, an Apple laptop and more.

So she invested her own money into meeting up with the guy and after spending a full weekend with him and a total of seven rounds of sex – including one that featured skin-to-skin – she met her when the guy jilted her in the guise of going for a business meeting.

She revealed that he left only the sum of a thousand and three hundred Naira for her. The bitter lady then took to cursing but transferred her aggression to the whole of Nigerian men as she says God will punish them all because of the sin of the man she encountered. 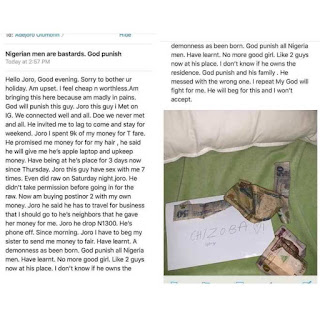