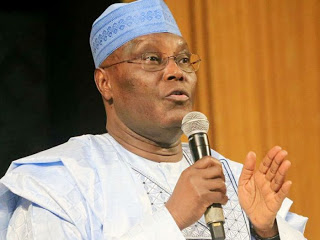 Olisa Agbakoba, a Senior Advocate of Nigeria, SAN, has explained why the Peoples Democratic Party, PDP, and its presidential candidate, Alhaji Atiku Abubakar, may lose in court.
Agbakoba, a former President of the Nigerian Bar Association, NBA, said at this stage, Atiku should assume the role of a statesman instead of going to court.
The senior lawyer pointed out that it would be difficult for the PDP to prove that the votes in the South-East were reduced and to identify whether INEC or APC was responsible.
In an interview with Vanguard, Agbakoba insisted that there is a lot Atiku can do even though he is not the President instead of going to court.
He explained, “I feel that going to court will not necessarily prove that the election was marred by massive irregularities.
“I feel that the stage Abubakar Atiku has attained now is a national one. And having garnered 12 million votes, I feel that, against all odds, the side of irregularities that came out of the election predicts more to the weak electoral processes that we have.
“I should advise that former Vice President Atiku Abubakar moves into the position of a statesman and leaves a legacy by assisting the civil society, the small parties and the PDP in reconstructing Nigeria on the question of a strong electoral system and the question of a strong legal system.
“There’s a lot Atiku can do even though he is not the President.
“At 74, 73 or 72 years of age, I feel that this should be his last chance. And more so, what will the petition’s outcome be?
“Petitions are based on two types of issues. One is the electoral malpractice.
“The other is a tactical issue. From what I can see, the petition will be based on electoral malpractice.
“This is an extremely difficult thing to say. How do you prove that the votes in the South-East were reduced and who is responsible? INEC? APC?
“I would rather say Atiku should maintain the status quo of a statesman than descend into the arena of the court of law. The court of law is too small today.
“The national court is a bigger space that I personally feel Atiku should be favoured.
“And given the fact that it is not as strong as it should, I think Atiku should play a very strong role to build a political structure that will solve issues.
“Even the whole party, PDP, needs to reform, rebrand and reposition for 2023, so that a young vibrant President from the North or South or from anywhere in the country can be promoted.
“I think that should be Atiku’s legacy, and not to contest the outcome of the election in court.”