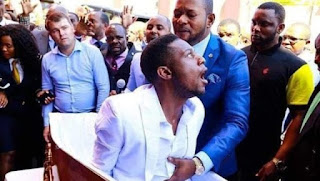 According to media reports, the infamous resurrection pastor of Alleluia Ministries in South Africa, Alph Lukau, who is said to have resurrected a man in a coffin over the weekend, wants to clear his name.
This comes after Incredible Happenings church leader, Paseka “Mboro” Motsoeneng issued a media statement in which he and the SA Funeral Practitioners’ Association (Safpa) voiced their displeasure at “such an antic for the sake of quick fame and cameras”.
Mboro announced that he would confront Lukau for “bringing Christianity into disrepute”, but he was not allowed to enter the church venue when he went there.
Now Lukau, through his lawyers, has written to Safpa, claiming that the statements made in the media release were “damaging statements which are clearly defamatory”.
The letter from SD Sim of Sim & Botsi Attorneys Inc has been seen.
The letter states that Alleluia issued a statement revealing its version and that Motsoeneng disregarded that when he issued his media statement.
“In addition, you will note that our clients have made it plainly clear in the statement that they deny the allegations made by the funeral parlours in relation to our clients being complicit in any misrepresentations. In fact, our clients have denied any involvement with these funeral parlours at all,” the letter stated.
A separate letter was sent to Mboro. Through his lawyers, Lukau proposed to meet with Safpa and work with it to probe the allegations, “exposing those who have unlawfully sought to implicate our clients in any wrongdoing”.
“We have no doubt that by working together, the truth will be uncovered and that if any wrongdoing is exposed, that the perpetrators will be brought to book.”
“We would furthermore urge you to distance yourself from the statements made by Mboro/the Incredible Happenings Church as our client would want to work together with Safpa as opposed to litigating against Safpa.”
Mboro has laid a fraud charge against Alleluia church leaders at the Sandton police station.
Lukau said on radio on Wednesday that the man was already alive when he arrived at the church.
Speaking to Gauteng broadcaster PowerFM’s Power Drive host Thabiso Tema, Lukau said he was busy with a sermon on Sunday when he was interrupted and told that a person in a coffin had been brought to the church.