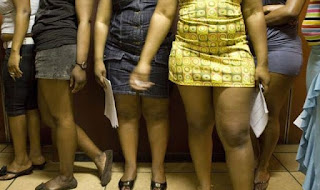 Dissatisfied with the victory of President Mohammadu Buhari at the Presidential election held last Saturday, commercial sex workers at the notorious Upper Iweka axis, Onitsha, Anambra state, told Orient Weekend that, “it is going to be another four years of bad market to us”.
Speaking through their spokesperson who simply identified herself as Chinwe, from Awka, they feared that the very few customers they have will run away this time around because of Buhari‘s victory adding that there is no money to spend.

“How can we continue in this bad market again, our customers ran away when Buhari came on board and the few that we manage, sometimes we give them sex free of charge because it is not that they don’t want to pay but that the money is not there.

When they want to pay they pay #300 for short time and N1,000 a night unlike when former President Goodluck Jonathan was in power, then you are sure of ‘take home’ after expenditure, people then queue up with reasonable sum of money, waiting for their turn to have sex with us and sometimes they give us drink and money but now nobody cares to see your face”

“The victory of Buhari will lead some people to commit so many atrocities because a hungry man is an angry man. There is no money and people are hungry and no hope until after another four years of suffering. Does that man know God at all?”

“I graduated from the tertiary institution three years ego and would have died of hunger if not for this my prostitution. Who cares about me except my poor old parents and I am their bread winner. It is from prostitution that I paid my school fees up to graduation and severally I tried to gain employment but no way. In this business of prostitution they have come again with their trouble that Buhari has won again after the first four years of bad market for us, see me oo, see wahala”

Whoever that doesn’t want our business to prosper his own business will not prosper. Let government give people work, food, money and these things will get to us through our customers” she pleaded.
In her contribution, one of those who flanked by the spokesperson, who gave her name as Nkky, from Ihiala, said that, “formerly I see at least seven to ten men a day and go home with reasonable money but today, Buhari chops alone”.

“My three siblings are in secondary school and I cater for them and pay for the house rent where we live in Fegge. I make the money from this prostitution business because nobody wants to know or take care of me”.

“Today I hardly get three men to keep body and soul together because Buhari is in power. If I see former President Ibrahim Babangida or Jonathan I will give them sex for free because they put food for me on the table, God will bless them” she prayed.