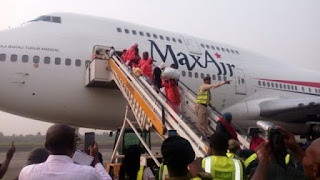 No fewer than 330 Nigerians who migrated illegally to Libya will be repatriated home today.
Spokesman of Ministry of Foreign Affairs, George Ehidiamen, who disclosed this in a statement in Abuja, yesterday, said the deportation would be coordinated by International Organisation for Migration, IOM, in collaboration with the Embassy of Nigeria in Tripoli, the Libyan capital.
A group of migrant men, mainly from Niger and Nigeria, have a rest next to pick up vehicles, on January 22, 2019 during a journey across the Air dessert, northern Niger, towards the Libyan border post of Gatrone.
He explained that the returnees would be flown in simultaneously on board two chartered Buraq Airline flights, which would arrive Murtala Muhammed International Airport, Lagos, at about half past four this afternoon.
The statement explained that on arrival, the returnees would be received by officials of Nigerian Immigration Service and other relevant agencies.
It stated the ministry’s desire to work with relevant authorities to address the scourge of illegal migration by Nigerians to Libya.
Recall that hundreds of Nigerians trapped in Libyan have in the last three years been evacuated home by the federal government.