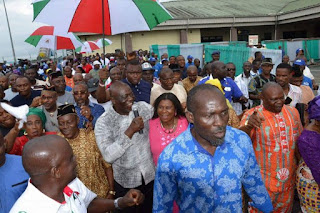 The Peoples Democratic Party has again raised a fresh alarm that the federal government and the All Progressives Congress have perfected the plans to arrest its leaders before the 2019 polls.

The National publicity Secretary of the party, Kola Ologbondiyan made this known in a statement issued in Abuja on Monday.

Ologbondiyan added that the arrest of the Kaduna state publicity Secretary of the party by operatives of the Department of State Services is an indication of what will happen before the polls.

He said: “We are aware that Mr. Bako’s arrest is prelude to the planned clampdown of our campaign officials by the Buhari presidency and the APC whose aim is to instill fear in the polity, incite crisis and derail the electoral process, having realised that they have lost even before the polls.

“It is instructive to state that the DSS has given no reason for Mr. Bako’s arrest and detention, but only acted on the orders of the APC as expressed by the Assistant Publicity Secretary of Kaduna APC, Salisu Tanko Wusono, who openly stated that Mr. Bako deserves his ordeal.”