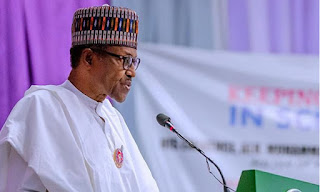 President Muhammadu Buhari has said that only God can punish the Peoples Democratic Party(PDP) for allegedly looting the country during the party’s 16 years in power at the federal level.

Buhari said this while meeting with his local and international support groups at the state house in Abuja on Friday.

President Muhammadu Buhari
“With the large scale abuse of trust, only God can give them punishment. But those we can touch, we will get them prosecuted. Properties confiscated should be sold and the money put into treasury,” he said while addressing the leaders of the support groups.

“I went to the Central Bank of Nigeria and asked him for money and he said there was no money.”

He said the last time roads rehabilitation took place was under Sani Abacha when Buhari served as chairman of the Petroleum (Special) Trust Fund which intervened in infrastructural projects.

In May 2018, Buhari, in an interview with the Voice of America, said God would judge the PDP for mismanaging the country’s resources.

“Nigerians know that there were no roads or rail lines, there was no power, despite the billions of dollars spent. Only God will judge this thing,” he had said.

Former presidents, Olusegun Obasanjo, Late Musa Y’adua, and Goodluck Jonathan governed the country from 1999 to 2015 under the PDP while Abacha was military head of state from 1993 until he died in 1998.