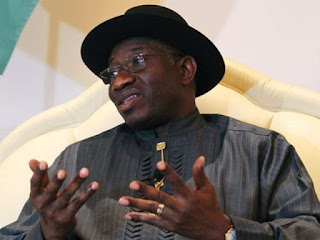 Former President of Nigeria, Goodluck Jonathan, has send a strong warning to politicians, asking them to desist from hate speech which is capable of plundering Nigeria into an unprecedented war.

Jonathan expressed worry over the fear expressed at different quarters concerning the coming elections, on whether it would be peaceful, free and fair.

He, therefore, warned politicians to desist from playing roles capable of plunging the country into civil war, adding that anyone who loves Nigeria will not lend support to any threat to the peace of the country.

The former President said this at a peace conference with the theme: ‘Peaceful elections and national development,” organised by the Goodluck Jonathan Foundation, on Thursday, in Abuja.

Jonathan said: “We must do everything to avoid conflict because it is always difficult to erase these feelings.

“If people feel INEC and similar bodies are fair to all, it will make citizens behave better but if you do otherwise, it will be a recipe for crisis.

“We are convinced that anyone, either in government or outside government, who truly loves Nigeria will not want to play the role of the villain by lending his support to any action that instigates crises.”

“As the ongoing democratic process unfolds, with the rest of the world watching with keen interest, we are also mindful of the worries of Nigerians on whether it would end peacefully.

“Our political leaders must realise that the greatest and most enduring legacy to leave behind is that of peace and development.

“These breed of politicians often ignore the fact that to be patriotic is to love your country and be prepared to live and die for her honour, reputation, freedom, progress and the ascendancy of the common good.

“You can restore destroyed infrastructure almost to its former state or even better, but you cannot easily repair people’s psyche, reconcile aggrieved persons and restore hope in a nation, once they are damaged in destructive leadership struggles.

“We experienced the civil war that ended since 1970 but up to date, the feelings are still in even children who were not born at that time because of the stories they get told and that is why we must do everything to avoid conflict because it is always difficult to erase these feelings.”