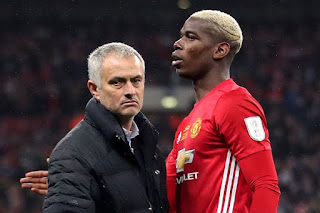 The France star backed Pogba to fulfil his potential at Manchester United but added that he cannot use his relationship with Mourinho as an excuse for his sub-standard performance.

The France international admitted he was guilty of a lack of focus during his side’s shock defeat at Brighton last weekend.

He had also claimed he would be fined if reveals all about his relationship with the former Real Madrid boss following United’s opening weekend win over Leicester City.

Mourinho has also invited Pogba to clarify his recent comments ahead of Monday’s clash wit Tottenham at Old Trafford but Rooney, who played alongside Pogba during his two spells at the club, insists his former teammate must concentrate solely on his performances on the pitch.

“He is a fantastic player but he has to do it for himself,” he told CNN World Sport.

“If they’re going to win the title, he’ll be the main player in terms of them doing that.

“You hear a lot of people saying Jose Mourinho needs to get the best out of him but he needs to do it for himself and prove he’s at that level to help Man United.”