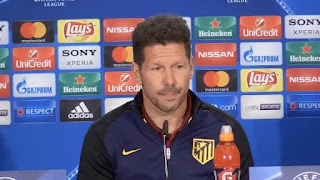 Atletico Madrid coach Diego Simeone has revealed his choice between Cristiano Ronaldo and Lionel Messi, according to the report in MARCA.

Simeone and his team are in Singapore to play Paris Saint-Germain on Monday, but before the clash, the press was keen to clarify a leaked voice message from the World Cup.

Discussing Argentina’s struggles, he had discussed the role of Lionel Messi but wanted to set the record straight.

“I would choose Messi definitely, without any doubt,” when asked which of him or Cristiano Ronaldo he preferred.

“Yes, I said it, but the conversation was between friends talking about football.

Simeone and his team must find a way to stop Messi if they aim to win the La Liga this season, though he might be relieved and happy with the exit of Ronaldo from La Liga.