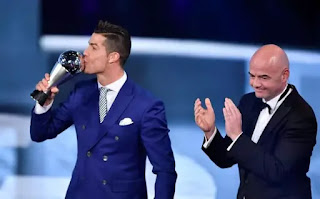 Since the split from France Football, Ronaldo has won the 2016 and 2017 edition of the prestigious title – which is now known as The Best FIFA Men’s Player, while France Football continues to hand out the Ballon d’Or.

The 10-man shortlist was selected by a Fifa panel of experts, including Ronaldo Nazario and Frank Lampard.

The voting period starts on 24 July and commences on 10 August, and will be decided by four voting panels, namely: media representatives, national team coaches, and national team captains, while the general public is also allowed to vote on the official Fifa website.

Each group has 25% of the overall vote.

Neymar, who made a world-record switch to Paris Saint-Germain from FC Barcelona last summer has missed out entirely on the nominees list after finishing on the third place last year.