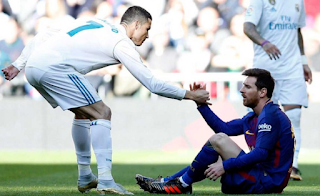 Lionel Messi may be set to reignite his rivalry with Cristiano Ronaldo in Italy, after the Barcelona superstar emerged as a shock target for Inter Milan.

Ronaldo’s nine-year rivalry with Messi in LaLiga ended this summer, with the Portugal captain leaving Real Madrid for Juventus in a £88m transfer.

But just weeks after leaving the Santiago Bernabeu, speculation has already begun over the pair resuming their battle in Serie A.

The rumour comes from Marco Tronchetti Provera, the CEO of Pirelli and long-time sponsors of Inter, who claims the club’s owners Suning could launch a monster bid for Messi, according to TuttoSport.

“I hope that Suning, once Financial Fair Play will allow it, can make a huge signing,” Provera said.

“Messi? How can you say no to Messi?”