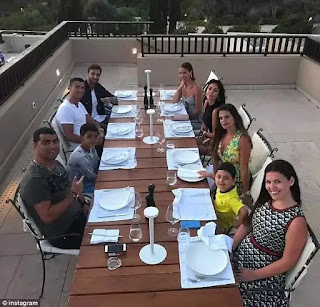 Juventus football star, Cristiano Ronaldo is reported to have dropped a whooping N8.4m (£17,850) as tip to workers at the Greek luxury hotel he vacationed after the World Cup.

This is coming after the star spent his off days at the hotel in Greece following Portugal’s round of 16 exit from the 2018 World Cup.

The 33 year old who is said to have signed his move to Juventus at the hotel enjoyed his holidays at the Mediterranean with his family-his girlfriend, son, mum and sister. Ronaldo was said to be so impressed with the service he got at the hotel that he dropped N8.4m as a tip to workers when he was leaving.

According to the UK Sun, Ronaldo asked that the tip is shared among all the workers at the resort which left the entire staff shocked and surprised.

Ronaldo has since left the resort and first travelled to Turin where he had his medicals before he was unveiled as a Juventus player.

He is currently on his annual CR7 tour of China.