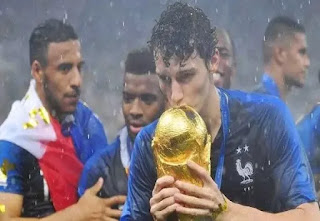 Bayern Munich have reportedly agreed to a deal to sign France World Cup winner Benjamin Pavard according to report.

The 22-year-old Stuttgart defender was very instrumental for the Les Blues in the right-back position that led Didier Deschamps side to their second World Cup triumph in Russia included scoring a real screamer for the eventual champs in their Round of 16 clash against Argentina.

Die Roten are desperate to keep Pavard for another season who played 36 times in all competitions for last season but it appears losing their main asset to Bayern Munich this summer.

Tottenham Hotspurs are also interested in France international whom they see as a potential replacement for Toby Alderweireld with Belgian look likely to quit White Hart Lane before the end of the transfer window.

According to SWR Sport insisting that Bavarian have an agreement with Stuttgart for the versatile defender to complete a switch to the Allianz Arena ahead of the start of the 2019-20 campaign.

The report suggests that Bundesliga Champions will pay £31.2m for Pavard who had a release clause in his contract.