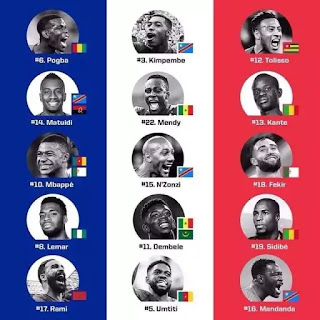 Kylian Mbappe, the 19-year-old who lit up Russia, scoring four goals, including one in the final to become the second youngest player since Pele in the 1958 score in the final of the Mundial has Cameroonian and Algerian descent.

Ngolo Kante, who marshaled the midfield for France is of Malian descent, whereas Paul Pogba who also registered his name on the scoresheet in the final is of Guinean descent.