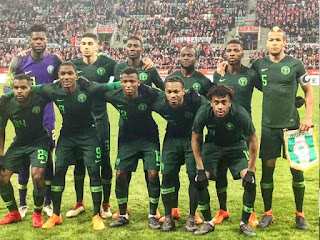 Nigeria have been rated the 25th best nation by the federation of International Football after the conclusion of the 2018 FIFA World Cup hosted by Russia.

This is sequel to its only victory against Iceland in its second group game that placed them ahead of seven other nations.

According to FIFA records, Nigeria dropped after losing 2-1 to Argentina in the group stage in Saint Petersburg, unlike the last edition in 2014 where its ranking went up after reaching the round of 16.

Leading the ranking is France, followed by runners-up Croatia and Belgium who defeated England 2-0 in the third place match.

Hosts Russia placed fifth with Sweden, Brazil, Uruguay and Colombia followed in sixth, seventh and eighth as quarter finalists in this year’s tournament.

All the quarter finalists were paid $16m each; teams that crashed out in the second round were awarded $12m each, while Nigeria and all others that failed to go beyond the group stage received $8m each for participation.