The second goal scored by Ahmed Musa in the game against Iceland at the just concluded World Cup in Russia has been shortlisted for the Goal of the Tournament Award by FIFA. 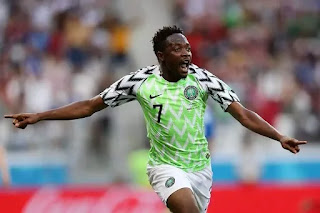 A total of 169 goals were scored at the just concluded Russia 2018 World Cup but only 18 of them are being considered for the top award.

Musa will be battling hard as goals from Cristiano Ronaldo, Lionel Messi and the likes are also on the shortlist.

The voting for the Best Goal in Russia 2018 will be open until July 23 on FIFA’s official website.

Two goals scored by Russia midfielder Denis Cheryshev and one from his teammate striker Artem Dzyuba at the 2018 FIFA World Cup are among the contenders to win the Goal of the Tournament title.

The others are below: