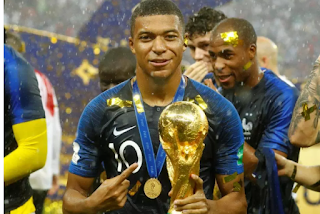 Kylian Mbappe has ruled out a move away from Paris Saint-Germain this summer after lifting the World Cup with France. The 19-year-old was one of the stand-out stars of the tournament and was awarded the trophy for Young Player of the Tournament as he became only the second teenager to find the back of the net in a final, after Pele in 1958, as Didier Deschamps’ team beat Croatia 4-2.

Mbappe’s performances have seen him linked with Real Madrid, who are searching for their next Galactico, having allowed Cristiano Ronaldo join Juventus in a £100million deal. However, following the final, Mbappe insisted he has no intention of leaving the club this summer.

‘I will stay with PSG, continuing on my path with them,’ Mbappe told reporters. ‘I am at the beginning of my career.’
Real Madrid have also been heavily linked with Neymar this summer as they look to sign their next star man. However the Spanish giants have moved to distance themselves from any move for the Brazilian.