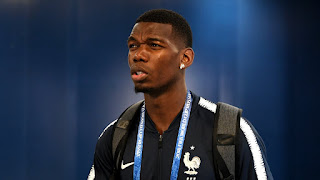 Cristiano Ronaldo has reportedly asked Juventus to bring Manchester United star Paul Pogba back to the club.
Pogba has been linked with Real Madrid and Barcelona, as well as Juventus, where he enjoyed four successful seasons.
Reports in Spain have suggested that Ronaldo is keen for his new club to add further quality to the squad as he seeks his fourth consecutive Champions League title.
And according to Don Balon, a Spanish outlet famous for its outlandish transfer claims, Ronaldo has requested Pogba’s return to Turin.
Juventus would need to sell before they can add to their squad following suggestions that they are looking to offload one of their strikers to fund Ronaldo’s move.