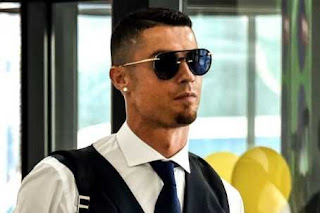 Juventus new signing, Cristiano Ronaldo is now the third best-paid footballer in the world after his stunning transfer from Real Madrid.

Daily Post claim the Portuguese moves ahead of Chile’s Alexis Sanchez who earns £26.4m a year following his move to Manchester United in January.

Some Chinese Super League players such as Hulk, Oscar and Ezequiel Lavezzi made the top 10 list.