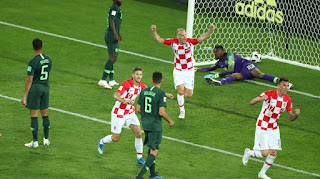 The governing body of football, Fifa, has launched a new investigation into the Croatia National Team and Croatian Football Federation following an incident that occurred during their Group D match against Nigeria on June 16.

Telegram.org says Croatian fans displayed the banner of The Ustasha during the game at the Kaliningrad Stadium.

The Ustasha – Croatian Revolutionary Movement- was a Croatian fascist, racist, ultranationalist and terrorist organization between 1929 and 1945 and fought for Croatia’s independence and dissolution of Yugoslavia.

In a separate case, Ognjen Vukojevic was fined by Fifa as a result of the video in which he stated, “This is a victory for the Dynamo (Kiev) and for Ukraine!”, while Besiktas defender Domagoj Vida was warned.

Vukojevic, who scouted the Nigeria National Team and players before Croatia’s World Cup opener, was relieved of his duties by the Croatian Football Federation HNS and had his accreditation revoked
An own goal from Oghenekaro Etebo and a penalty from Luka Modric helped Croatia to beat Nigeria 2-0.