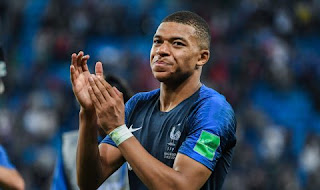 Kylian Mbappe insists he has no interest in succeeding Cristiano Ronaldo as the next winner of the Ballon d’Or.

The teenager produced an outstanding display as France edged a tight World Cup semi final against Belgium, reaching Sunday’s showpiece against either England or Croatia thanks to Samuel Umtiti’s second half header.

Paris Saint-Germain striker Mbappe has been tipped to follow in the footsteps of his idol Ronaldo, whose transfer from Real Madrid to Juventus was confirmed earlier on Tuesday as the 33-year-old ended his nine-year, trophy-laden spell in the Spanish capital.

Ronaldo has won the Ballon d’Or in each of the last two years but his and Lionel Messi’s stranglehold on the award appears to be coming to a close, not that Mbappe has given it a second thought.

In this image taken with a slow shutter speed France’s Kylian Mbappe controls the ball during the semifinal match between France and Belgium at the 2018 soccer World Cup in the St. Petersburg Stadium in St. Petersburg, Russia, Tuesday, July 10, 2018. (AP Photo/Pavel Golovkin)

‘I wasn’t born in 1998, so I have never seen people on the Champs-Elysees celebrating.

‘I am going to give everything in this final. We will kill ourselves on the pitch to finish the job.’

Arsene Wenger, meanwhile, who nearly signed Mbappe for Arsenal before his move to PSG last summer was full of praise for the teenager.

He told beIN Sports: ‘He is the type of player who always makes you hopeful when he gets the ball that he’s going to do something special.

‘Watching him soothes the heart.’