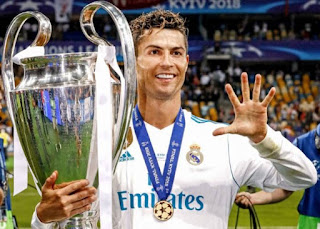 Cristiano Ronaldo explained his decision to leave Real Madrid and sign with Italian champions Juventus in an open letter to fans, posted on the Spanish club’s website not long after his move was announced on Tuesday.

The move marks the end of a nine-year spell at the Bernabeu where the reigning Ballon d’Or winner won two La Liga titles and four Champions Leagues, but as Ronaldo explained it, the time was right for a change.

Ronaldo’s statement in full: “These years at Real Madrid and in this city of Real Madrid have quite possibly be the happiest years of my life. I only have feelings of great gratitude to this club, to the fans and to the city. I can only give thanks to all of them for the love and affection that I have received.

“However, I feel that the time has come to begin a new stage of my life and that is why I have asked the club to accept my transfer. I feel it this way and I am asking everyone, and especially my fans, to please understand me.

“These have been nine of the most absolutely marvelous years. These have been nine unique years. This for me has been a very emotional time, full of deliberating, although difficult because Real Madrid is at a very demanding and high level but I know very well that I will never forget that here I have enjoyed football in a unique way.

“I have had fabulous teammates, both on the field and in the dressing room. I have felt the warmth of an incredible fan base and together we have conquered three straight Champions Leagues titles and four Champions League titles over five years. And together with them in addition, on an individual level, I have had the satisfaction of having won four Ballons d’Or and three Golden Boots, all during my tenure at this most immense and extraordinary club.

“Real Madrid has won my heart and that of my family and it is because of that, now more than ever, I would like to say thank you. Thank you to the club, to the President, to the directors, to my teammates, to all the staff, the doctors, the physios and all the incredible people who work there in each of their capacities and who pay tireless attention to every little detail.

“Infinite thanks once more to our supporters and thanks also to Spanish football. During these nine exciting years I have come up against great players. My respect and recognition to all of them.

“I have thought a lot and I know that the moment has come for a new cycle. I am leaving but I will always feel that this jersey, this badge and the Santiago Bernabéu are mine, no matter where I am.

“Thanks to everyone and, of course, as I said the first time in our stadium nine years ago: ¡Hala Madrid!”