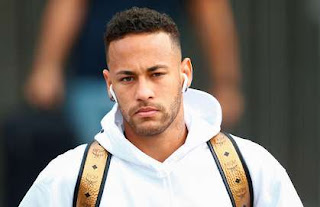 Neymar completely divided opinion with his theatrics and performances for Brazil during his time at the World Cup.

While the 26-year-old’s diving and play-acting infuriated some, others insisted he needed more protection from the referees.

Alan Shearer and Gary Lineker were among those who couldn’t stand the sight of Neymar going to ground screaming and clutching his limbs having barely been touched.

“It’s absolutely pathetic,” said Shearer. “There’s no doubting the ability of him, but it really is pathetic when he’s rolling around in agony, why does he feel the need to do that?”

While Lineker tweeted: “Neymar has the lowest pain threshold of any player in World Cups since Opta stats began.”

Brazilian Ronaldo, on the other hand, labelled the criticism as “nonsense” and said there was a “sense of unfairness” about the way players treated Neymar.

“There are many ways to see football and interpret it,” said the Brazil legend. “I am against all these opinions [on Neymar acting].

NEGATIVE NEYMAR HEADLINES
“He is an intelligent player in his movements and on how to defend himself from being tackled. I don’t think referees have been protecting him enough.
“When people repeatedly hit me I would feel a sense of unfairness. [The] criticism is nonsense. TV shows and newspapers just want to fill the space.”

It’s safe to say Neymar annoyed a lot of people and now, following Brazil’s exit in the quarter-finals and flight home on Sunday, the Paris Saint-Germain star has managed to anger his own fans.

According to AS , hundreds of Brazil supporters headed to the airport to greet Neymar and the rest of the squad upon their return – but they were left very disappointed.

Neymar sneaked out of the back door of the airport so that he wouldn’t be seen, which hasn’t gone down well with fans and the local media.

“When Neymar ‘dribbles’ away from the press, he’s kicking the nest of the golden goose,” wrote one publication.

Another said: “Whether they like it or not, the stars who are sought out by the press need to satisfy the fans, above all after defeats or elimination from the World Cup.”

This is a new low for Neymar. Brazil underwhelmed in Russia and a lot of that will be on their star man, who didn’t even have the decency to repay fans for their support when he returned.