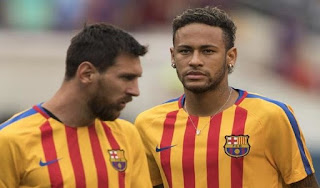 Florentino Perez has long sought Neymar’s signature, however, the Brazilian forward has been offered to Barcelona as the drama surrounding his future continues to intensify.

It’s turned into an annual saga, with the end result of either the former Santos star earning a new contract or a move away.

The summer of 2017 saw the former Blaugrana leave the Camp Nou to move to Paris Saint-Germain for a world record transfer fee, a switch which undoubtedly soured relations with the Catalan club.

Neymar’s father has a huge influence on the 26-year-old, and it is understood that the biggest clubs in Europe have been contacted by the player’s entourage offering his services to them in case there is a chance for him to leave the French capital.

Just a few days ago, Barcelona were contacted and had Neymar offered back to the LaLiga champions.

The objective of this action was to find out if Josep Maria Bartomeu would be interested in taking the Brazilian international back, even though this is considered a very remote possibility.

One factor has since changed, with Antoine Griezmann confirming that he would stay with Atletico Madrid, a decision which has rocked the Blaugrana’s immediate plans.

Much of their summer expenditure was expected to go on bringing the Frenchman to Catalonia with his buy-out clause standing at 100 million euros.

Within Neymar’s inner circle it was known that had Griezmann signed for Barcelona, he would have absolute no chance of returning.

However, in this new scenario there is the slim possibility that another mega transfer involving the forward could occur.

Barcelona would find it incredibly difficult to complete such a transfer from a financial perspective because there are fiscal issues behind the scenes at the club which are troubling.

Despite the record sale to the French club, Los Cules are expected to close the financial year with a very small level of profit, so bringing Neymar back would be a huge risk.

A number of Ernesto Valverde’s players have made clear how unhappy they would be if Neymar signed for Real Madrid, and that’s a factor that the Brazilian’s camp is acutely aware of.

Los Blancos have made him their first choice outfield transfer target for the summer of 2018, and this could further muddy the waters in Barcelona with Bartomeu no stranger to pressure from players.