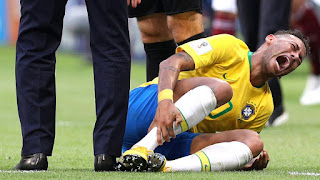 Ronaldo De Lima, a former Brazil striker, has leapt to the defence of his compatriot, Neymar Jr., who has come under criticism for play acting at the 2018 World Cup.
He described criticism of Neymar as “nonsense”, adding that the world’s most expensive player does not get enough protection from referees.
Following his side’s 2-0 defeat to Brazil in the last 16, Mexico coach Juan Carlos Osorio accused Neymar of “too much acting”, a view Ronaldo disagrees with.
“There are many ways to see football and interpret it.
“I am against all these opinions (on Neymar acting). He is an intelligent player in his movements and on how to defend himself from being tackled.
“I don’t think referees have been protecting him enough. When people repeatedly hit me I would feel a sense of unfairness.
“Criticism is nonsense. TV shows and newspapers just want to fill the space” Ronaldo said.