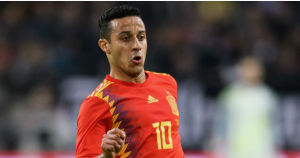 The Bayern Munich star’s father, Mazinho, was part of the Brazil squad that won the 1994 World Cup in the United States, when he was just 3 years old.

At the age of 19, he was with the Spanish U-19 squad when the senior squad were lifting the World Cup trophy aloft in 2010 in South Africa. Now, the former Barcelona man wants his chance to get his hands on a World Cup winners’ medal.

The Spanish side managed to finish top of Group B on goal difference, following a dramatic equalising goal from Iago Aspas in their game against Morocco, but Thiago knows that things need to change for his team.

“Without playing exactly as we wanted to we finished up first. We have a big margin for improvement but there were brilliant moments too.”

Despite the tricky start to the tournament for ‘La Roja’ and their managerial calamity which resulted in Julen Lopetegui being sacked just two days before the World Cup began, Thiago remains confident of team’s chances of becoming world champions because of the adaptability of the players in the squad to all styles of play.

“We have players who are playing in England in three-man defences. Players who play on the counter attack in their club sides, players who are used to playing the ball long. So we have that variety.