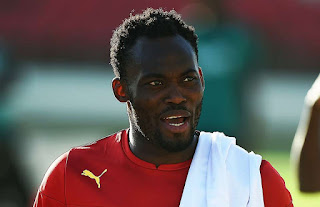 Chelsea fans will be able to recall some fond memories about Michael Essien.

The Ghananian midfielder, who signed for the London club in 2005, proved to be a key player for the club in his first few seasons.

Unfortunately, his latter years in London were ravaged with injuries and he eventually said goodbye to the club in 2014, where he joined AC Milan.

But it’s only been downhill from there.
Essien would only make 22 appearances for the Italian giants across two seasons before being shipped out to Panathinaikos.

He was released after a season, and after a period of time struggling to find a club, he eventually signed for Indonesian side, Persib Bandung.

But, he was released yet again in March after just a year with the Indonesian outfit.

And his career has just taken another turn for the worse, and it’s rather sad.

The Ghananian was set to get his career back on track with Romanian side, CFR Cluj. Reports reveal he was due to sign a contract worth £1 million a year.

Things were looking up for Essien, but then Dan Petrescu was replaced as manager by Edward Iordanescu.

And just a week into the job, Iordanescu decided to veto the deal that was in place with Essien due to fears that he was ‘too old’.

Ouch.
“There were some discussions about signing Michael Essien before I came to the club, but they never came to fruition,” he said. “I don’t know what amounts were involved, but I did not need the player.

“I stopped Essien’s transfer to CFR Cluj. I already have a lot of experienced players who our youngsters can look up to.

“At present I don’t need players aged 36 or 37. We already have a valuable squad.”

Poor Essien.
He just can’t catch a break.
Let’s hope he can find a new club hope so he can resume his footballing career.

Iordanescu may not have a high opinion of Essien, but one man that does is Jose Mourinho.

Mourinho managed Essien at both Chelsea and Real Madrid, and he had some lovely words to say about the Ghananian in April.

“He was ready to die for the fellow players, for the club, for the manager, why he was ready to play like he did for me at Real Madrid with a knee that was not a knee anymore,” he said.

“It was a destroyed knee but with that personality, that desire and that mentality he suffered, always he suffered, but always with a smile. Michael smiles a lot.”