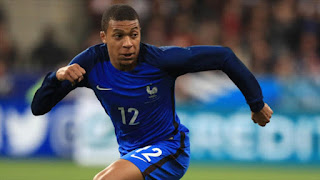 As global superstars Messi and Ronaldo depart the Russia 2018 FIFA World Cup, a new teenage star shinning brightly at the tournament Kylian Adesanmi Mbappé is born
The PSG star who play for the French national team was born with a middle name Adesanmi and while that is clearly a Nigerian name, no ties had been found between the 18-year-old and Nigeria.
Several reports, however, have it that Mbappe’s father Wilfred Mbappe has Cameroonian and Nigerian roots.
Wilfred Mbappe’s Nigerian roots have not been often highlight as he was known as a Cameroon refugee who migrated to France and got married to Algerian-French lady Fayza.
But according to the reports, Wilfred gave his son Mbappe the Nigerian (Yoruba) middle name Adesanmi meaning ‘crown fits me.
Mbappe’s younger brother also has a Nigerian name, Adeyemi. He also has brother Joris Kembo Ekoko who his dad adopted, a footballer of Congolese descent.
Mbappe’s father has been very influential in his career, being his first coach and currently his agent.
On 31 August 2017, Paris Saint-Germain announced the signing of Mbappé from Monaco on loan.The fee required for a subsequent full transfer was set at a rumoured €145 million plus €35 million in add-ons, making him the most expensive teenager ever, and potentially the second most expensive player ever, behind teammate Neymar.
His goals knocked Argentina out of this year’s world cup.