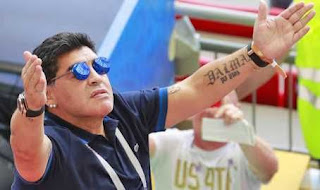 Diego Maradona has slammed superstarLionel Messi after Argentina crashed out of the 2018 World Cup.
Messi was not too involved for most of the 4-3 defeat to France on Saturday.
The Barcelona star played as a false nine with  Cristian Pavon and Angel Di Maria on both wings.
Which meant forwards Sergio Aguero, Paulo Dybala and Gonzalo Higuain were left on the bench for the match.
Now, Argentina legend Diego Maradona has slammed Messi for his performance, likening him to Argentine comic character Patoruzú.
“I watched Leo very closely,” Maradona said.
“(Messi was) very far from the goal. Yes he was put at No 9 but he has to bring the game together.
“We are talking more about Patoruzú than about Lionel Messi.”
Also, Maradona critised Coach Jorge Sampaoli for his starting XI.
“It was evident from the formation, Pavon, Messi and Di Maria had to go to attack,” he said.
“(They had to) get in the area around the penalty box, push the centre-backs and trap them in.
“Yes they can create play, but they are not forwards.”
“We have to aim at the kids, go through the good things that the boys leave us with even though they won’t be there anymore,” he said.
“(We have to) try to inculcate the sacred fire that at times seems to be lacking in Argentina.”
Now, it is unknown if Maradona will continue to watch games at the World Cup in Russia since Argentina are out.