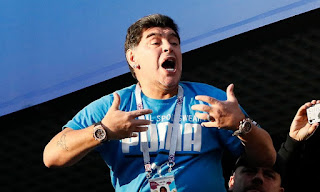 As usual, Argentina footbal icon Diego Maradona was in the stadium to watch the game but this time, he was spotted inside the Kazan Arena making up with a blonde woman.
He was spotted kissing a woman to console himself after Argentina crashed out of the 2018 World Cup after a humiliating defeat against France.